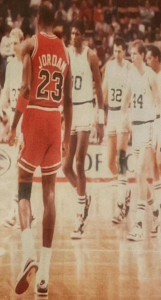 NBA playoffs are in full effect. It reminds me of my childhood. I’ll admit, I was the kid who had Michael Jordan posters all over my walls and ceilings.  I wasn’t a huge fan of Michael Jordan initially. In 1985 he was a highlight reel. I enjoyed watching the dunks that were so ferocious and acrobatic that even D.J. said his creativity and athleticism was something he’s never seen. There were plenty of doubters and skeptics around the league and in the Media. Most critics and skeptics said Michael Jordan will never get to the playoffs or win a championship with his playing style, this was a team sport, and teams like the Lakers and Celtics was what team basketball was.

In 1986, Jordan broke his left foot in the third game of the 1986 regular season. I remember him sitting on the sideline, watching the game with so much intensity.  He stared at players with his foot in a cast chewing his gum intensely. He looked like a hungry wolf staring at sheep. Articles began to circulate that Jordan was unhappy with management because he felt he was ready to play.  Chicago Bulls management finally let Jordan play and the Bulls made an eight-game regular season push to make the playoffs.  He proved his doubters wrong. The doubt continued, he’s never won a playoff series, he’s too skinny for the physical NBA, he will continue to be injury plagued, he can’t play defense, and he can’t shoot from the outside.

In the 1987 season he proved his doubters wrong for the second and third time.  Jordan won the Defensive Player of the Year Award and won his first playoff series of his career, I forgot, he was also the NBA Most Valuable Player (MVP) that year.  The haters now claimed that Jordan couldn’t shoot the ball and when he played against the better defensive teams in the NBA he always struggled. Jordan worked exclusively on his shooting in the off-season.

In the 1987-1988 season Jordan greatly improved his shooting and cemented his unstoppable fade-away jump shot, proving his critics wrong again. The Bulls beat the Cleveland Cavaliers and the New York Knicks in the playoffs so lost to the physical Detroit Pistons, which formulated a rival that still haunts Jordan to this day. In the 89-90 season the Bulls lost to the Pistons in a 7 game Eastern Conference Playoff series. The Pistons incorporated a physical defensive scheme called “The Jordan Rules. The hate for Jordan was again greater than ever, he was criticized for not being tough enough in the physical NBA. Jordan took this to heart; he heard the criticism and judgement. 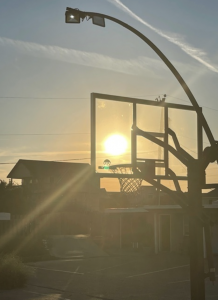 He began a fitness and dietary regime that started every morning.  His chef prepared him meals that fostered muscle recovery and he lifted heavy weights with low repetitions to pack on muscle.  Teammates began seeing the physical changes in Jordan, Scottie Pippen, Ron Harper, and Randy Brown began joining Jordan every morning.  This morning ritual became known as “The Breakfast Club” and had dominant results on the NBA the next season.

In the 1990-1991 the Bulls swept the Detroit Pistons 4-0 in the Eastern Conference Finals and went on to beat the Los Angeles Lakers in the NBA Finals for Jordan’s first NBA Championship.  Jordan said that sweeping the Detroit Pistons was more satisfying than beating Magic Johnson in The NBA Finals. Michael Jordan acknowledged that he was motivated by others doubt.  The motivation came from him not being able to return from injury to he couldn’t win a championship. Former player and fans acknowledged when they challenged Michael Jordan, he always took it as a personal challenge and proved them wrong.  Phoenix Suns guard Eddie Johnson recently stated on the Dan Patrick Show that he said to Michael Jordan, “Looks like you’re not getting forty tonight. He said this to Jordan at the end of the third quarter in one of their matchups. At the beginning of the fourth quarter Jordan went off. He scored 27 points on the first 12 possessions of the quarter. After the game Eddie Johnson said to Michael Jordan, “What is wrong with you?” Jordan replied, “You better watch what you ask for”. Sorry Kobe lovers, Kobe copied and marked the “Black Mamba Mentality”, this in essence is Michael Jordan.

In Early recovery your motivation may be to get sober so you can get the “habit” or “monkey” off your back. You may be tired of being sick, tired of hurting yourself, tired of hurting others.  You may want to get the probation officer, the judge, your wife/husband off your back.  There are a multitude of external motivating factors to get sober though if we can listen to that internal voice that we cover with addictive substances, that voice is asking for more.  That voice often whispers then as our addictions progress it yells, “You are more than this”! Sadly, we come into treatment and that voice of potential threaded with beautiful dreams becomes quiet.  We focus on “Just for Today”, we settle.  The motivating factors of the judge, the wife/husband/ etc. begin to fade. We need another “Fire”, another motivating factor. If you are early in recovery, I encourage you to continue to reframe your motivation on a constant basis to assist with personal growth and quality recovery.

A life of potential is necessary for long-term recovery.  I can admit that I tapped into my childhood. I utilized what I saw from Michael Jordan as a child.  I was the one who relapsed for nine years.  I’d walk into an AA meeting and the old timers would say, “How was it out there, you had enough?”, sometimes I didn’t even relapse. I was known as the relapse kid, still am if I walk into a AA meeting in Allentown PA.  I was attending Community College after two years in recovery. My classes were Tuesday and Thursday nights because I worked during the day.  When I returned to my Tuesday and Thursday night meetings, they called me up to pick up a white chip (which is a chip that signifies that you acknowledge your relapse and surrender) which I did not do and some AA members went and urged me to pick it up next week because you needed to be honest.  I understand their reasoning, I understand why they did not believe me.  For nine years I told every lie I could imagine to my AA family and to my friends and immediate family. I understood what I became, but that provided me with more motivation to erase that person, to fully change.

Motivation for recovery must grow or your recovery will not. What is your motivation? Will you allow fear to stop you from finding the motivation to save your life?

Take the Next Step

OUR PATIENTS AND THEIR LOVED ONES SAY IT BEST

Don’t go through the process of recovery alone. There are people who can help you with the struggle you’re facing. Get in touch with one today.

If you have coverage of any kind from a major insurance provider, your treatment is likely covered. We promise to keep your information confidential.